E. James Aiman, MD served 29 years on the faculty of the Medical College of Wisconsin (MCW), during which he served terms as Vice Chair and twice as Acting Chair (1986-1987 and 1989-1991) of the Department of Obstetrics and Gynecology. He died July 5, 2011 at the age of 68. The E. James Aiman, MD, Endowed Lectureship Fund has been established to honor his memory by continuing to support and advance medical education in the Department of Obstetrics and Gynecology at the Medical College, and to recognize his dedication to sustaining excellence in medical education through innovative teaching and patient care. 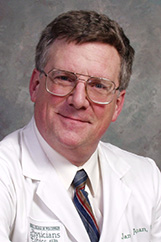 After earning his Bachelor of Arts in English from Marquette University, he went on to the Medical College of Wisconsin for his Doctor of Medicine, received in 1969. Dr. Aiman did a one-year internship at the University of Kansas in Kansas City, and then completed his residency in obstetrics and gynecology at the Medical College of Wisconsin in 1974. He went on to complete a fellowship in reproductive endocrinology at the University of Texas Southwestern Medical School in Dallas in 1976.

It was during his days as an undergraduate at Marquette that he met JoAnn Ruffolo. They were married in 1966. The Aimans have two sons, Daniel, now married to Lisa, and Patrick.

Dr. Aiman came to the College in 1981 as an Associate Professor of Obstetrics and Gynecology. In 1990, he was promoted to Professor, a position he held until he retired in 2010. Dr. Aiman made significant contributions to the College’s medical student and resident education programs during his tenure. He directed the student education efforts in the Department of Obstetrics and Gynecology for many years, and is clearly responsible for the career choice of many current OB-GYN residents and former OB-GYN residents across the country. He had a passion for clinical medicine, basic science, and the intersection of the two, and conveyed his deep interest while teaching basic science courses and directing clinical training.

Dr. Aiman played a key role in the formation of the current OB-GYN residency in 1991, building a single, united residency program from three competing local programs. During his career, Dr. Aiman developed a special interest in pediatric and adolescent gynecology and served as the department’s expert liaison to Children’s Hospital of Wisconsin for more than a decade.

You can make a contribution to the E. James Aiman, MD, Endowed Lectureship Fund through the College’s secure donation site. Or you can contact the Office of Development at (414) 955-4700. Thank you.