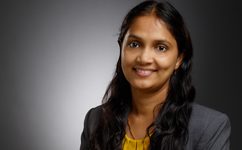 Dr. Sunila Pradeep has joined the Department of Obstetrics and Gynecology in August 2017 as an Assistant Professor. Dr. Pradeep completed her Ph.D. from India where she focused on developing novel immunomodulatory and anti-angiogenic agents in cancer models. She then joined Weizmann Institute of Science in Israel for her postdoctoral research where she continued research on discovering novel anti-angiogenic compounds.

Dr. Pradeep’s research interest is centered on identifying the immune populations in ovarian cancer. She will explore the contribution of microenvironmental factors in early ovarian cancer metastasis.

Please join us in welcoming her.