14 Aug Rounding with the Dean: Knowledge Changing Life in the Department of Obstetrics & Gynecology

On October 4, 2017, Josepah E. Kerschner, MD, Dean of the School of Medicine at the Medical College of Wisconsin, rounded in the Department of Obstetrics and Gynecology with Janet S. Rader, MD, Chair and Jack A. & Elaine D. Klieger Professor of Obstetrics and Gynecology. Dr. Rader planned for a number of her department’s faculty members to present on topics ranging from community engagement and global health to fertility preservation services for cancer patients.

Katherine Schoyer, MD, Associate Professor of Obstetrics and Gynecology, began discussing the latter topic by sharing that cancer patients’ change in fertility differs based on the form of cancer, the type and dosage of any chemotherapy, and also the location and intensity of any radiation treatments. Dr. Schoyer highlighted the department’s partnership with the LIVESTRONG foundation’s fertility preservation program to provide affordable access to medications and procedures. This allows patients to undergo treatments to cryopreserve oocytes (eggs) and embryos at significantly discounted costs. She also shared that advances in science and technology over the last two decades have substantially improved the success rates of achieving pregnancy with frozen eggs. 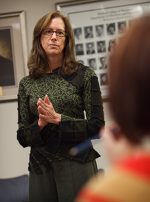 Kathy King, MD, Assistant Professor of Obstetrics and Gynecology, provided an update on the department’s work with Planned Parenthood of Wisconsin. MCW faculty members have provided administrative support and direct patient care at Planned Parenthood of Wisconsin, and our residents and medical students also undergo educational activities at the organization’s clinics. Planned Parenthood primarily serves underinsured, uninsured and undocumented women, and has a major emphasis on screening including colposcopy to diagnose and treat disease as early as possible. In her role as the organization’s medical director, Dr. King worked with her colleagues to solve a growing problem in which undocumented women were going untreated after being diagnosed with precancerous cervical lesions. Because the women did not qualify for Wisconsin Well Woman Medicaid, they could not afford the Loop Electrosurgical Excision Procedure (LEEP). MCW and Froedtert developed an affordable self-pay package that significantly increased access to this important treatment. 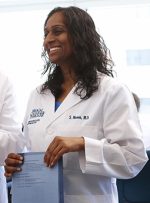 In addition to presenting about the Department’s partnership with Escuela Verde, Dr. Menon also discussed the Department’s work in global health through the Academic Observership Program. The Program’s first partner is Shijiazhuang City Maternity and Child Health Hospital in northern China. Dr. Menon said that MCW will host one or two physicians from the Shijiazhuang City hospital for six-to-eight weeks of clinical observation and participation in activities such as grand rounds and lectures. Two MCW representatives will later travel to Shijiazhuang City to help implement new clinical or research programs and participate in teaching sessions.

Erika Peterson, MD, Associate Professor of Obstetrics and Gynecology, introduced the Division of Maternal-Fetal Medicine (MFM) which takes a multi-disciplinary approach to patient care with the inclusion of a clinical psychologist, genetic counselors, fellows, a nurse practitioner and a nurse midwife alongside MFM physician specialists. The maternal side of the field focuses on maternal medical co-morbidities such as hypertension, diabetes and heart disease as well as on pregnancy complications such as preterm labor, pre-eclampsia and abnormal placentation. In addition, the MFM specialists provide prenatal diagnoses of fetal anomalies and genetic conditions, and perform in-utero fetal surgical interventions when applicable (and at a recent rate of 25-30 procedures per year). A major conduit for this work is the innovative Fetal Concerns Center, a partnership between Children’s Hospital of Wisconsin and the Froedtert and MCW Health Network which has increased the consistent integration of fetal medicine into the operations of both health systems. 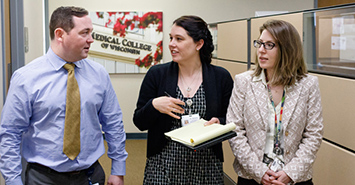 Also on the topic of maternal-fetal medicine, Anna Palatnik, MD, Assistant Professor of Obstetrics and Gynecology, discussed participation in multicenter national clinical trials, beginning with one to better understand the benefits and risks involved in treating pregnant women suffering from mild chronic hypertension with prescription medication. The current standard of practice to withhold hypertension medication during pregnancy was developed without rigorous supporting evidence, and it is at odds with the national public health goal of reducing the country’s significant rate of hypertension. It is important to establish a truly evidencebased best practice for the two-to-six percent of pregnant women that have chronic hypertension. And, if the findings give cause to change the status quo, this trial has the potential to lead to significant public health improvement. Dr. Palatnik also is the MCW site principal investigator of a trial seeking to find the first effective treatment for severe pre-eclampsia. Studies in the early 2010s found preliminary evidence that an antidigoxin antibody may ameliorate decreases in kidney function and improve maternal and neonatal clinical outcomes. These findings set the stage for a large, multicenter trial to see if the drug can extend gestation, reduce premature deliveries and improve health outcomes in cases of severe pre-eclampsia. Dr. Peterson added that her team was utilizing training offered by the Clinical and Translational Science Institute of Southeastern Wisconsin to gain additional expertise in clinical and translational research. Two faculty members had completed training and Dr. Palatnik had just accepted the opportunity to be trained.

Jennifer McIntosh, DO, MS, Assistant Professor of Obstetrics and Gynecology, joined MCW in 2015, and a significant draw for her was the opportunity to contribute to building the Maternal Research Placenta and Cord Blood Bank, which was founded in 2014. The roots of the bank are in a national effort led by the NIH to better understand the placenta’s role in pregnancy in order to improve the prevention and treatment of common complications. Conducting this research, however, requires many high-quality research specimens for analysis. Dr. McIntosh described efforts by her and a number of faculty members to create a tissue banking procedure that is now incorporated into routine prenatal care. By requesting consent at this stage and streamlining all of the follow-up processes, the bank has increased exponentially from eight consents in 2014 to 919 consents in 2017. The resulting specimens enable research in and with a number of Departments, including Medicine, Physiology, Pathology and Microbiology and Immunology.

Dr. Kerschner had a great experience visiting Dr. Rader and the Department of Obstetrics and Gynecology. He was impressed by the expertise and enthusiasm of all of the faculty presenters, and even had the opportunity to take a brief tour with Dr. Peterson of the new Froedtert Hospital Birth Center at Children’s Hospital of Wisconsin. The new facilities are fantastic and provide quick access to any needed specialty care, including Children’s top-notch neonatal intensive care unit. This was a wonderful way of sharing how the MCW Department of Obstetrics and Gynecology is using and creating knowledge to change the lives of families for the better.