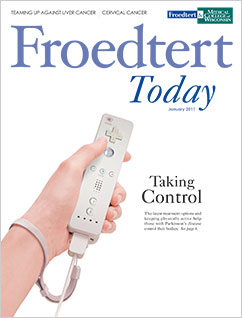 As seen in: Froedtert Today – January, 2011
Download the Full PDF

Women who have been treated for cervical cancer may be eligible for a current study on genetic susceptibility to that cancer. Exposure to the human papillomavirus (HPV) can lead to cervical cancer, but it doesn’t always.

“We want to understand why a small number of those exposed to HPV go on to get cancer,” said Janet Rader, MD, a Medical College of Wisconsin gynecologic oncologist, chair of the Department of Obstetrics and Gynecology and the study’s principal investigator.

As part of the study, Dr. Rader explained, the team also collects blood from the patient’s mother and father to examine which genetic variations the patient inherited and which variations they did not. The study’s results could help develop better testing for cervical cancer.

Dr. Rader is especially interested in patients who have another first-degree relative — a mother or a sister — who also has been treated for cervical cancer. For information on the CerGE research study, call Froedtert & The Medical College of Wisconsin at 414-805-3666 or 800-272-3666.