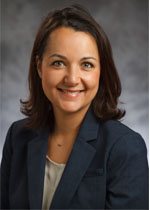 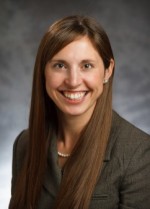 Rahmouna Farez, MD and Laura Jacques, MD, both Obstetrician and Gynecologists, have been named Co M3 Clerkship Directors for the Department of Obstetrics and Gynecology on July 1, 2014. They will be working with Dr. Joseph Davis, who is the Associate Director of the Clerkship Program.

Both Drs. Farez and Jacques joined the Department of Obstetrics and Gynecology in October 2013 as Assistant Professors.

Dr. Farez received her Doctor of Medicine degree from Albany Medical College in 2007. She then completed her obstetrics and gynecology residency in 2011 at Tufts Medical Center in Boston where she served as an Administrative Chief Resident. She received the Outstanding Chief Resident Clinician Award and the Society of Laproendoscopic Surgeons Resident Achievement Award in 2011. Dr. Farez most recently was awarded the Resident Teaching Award at MetroWest Medical Center in Framingham, Massachusetts.

Please join us in congratulating them and thanking Dr. Michael Lund for his dedicated time and commitment for being the Clerkship Director for the last 12 years.