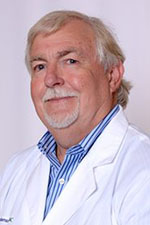 Dr. Illsley moved to Hackensack University Medical Center in 2012, following positions at the U.K. Medical Research Council’s Clinical Research Centre in London, the Department of Obstetrics, Gynecology and Reproductive Sciences at the University of California San Francisco and the Department of Obstetrics, Gynecology and Women’s Health at UMDNJ-New Jersey Medical School. His research focuses on the human placenta, its mechanisms of maternal to fetal transport, metabolism and role in the regulation of fetal growth. He has studied diabetic pregnancy, fetal growth restriction, preeclampsia and pregnancies subject to chronic hypoxia. He has published more than 80 articles in scientific journals on these topics. He has been awarded multiple research grants, primarily from the National Institutes of Health (NIH), with continuous funding since 1988. Dr. Illsley has been instrumental in developing and promoting the NIH Human Placenta Project, a 10-year effort to devise real-time methods for examining placental function.

Dr. Illsley is a leader in his field, helping to found both the Placenta Association of the Americas for which he served as the first President (2001-2011) and the International Federation of Placenta Associations for which he is completing a five-year term as President. He has served on several journal editorial boards and on the Council of the Society for Gynecologic Investigation and Perinatal Research Society. He was a charter member of the NIH Human Embryology and Development Study Section and continues to serve on multiple NIH study sections, reviewing research in perinatal medicine. Dr. Illsley has now put this experience and expertise to use in a new role, leading investigations for the Center for Abnormal Placentation. In collaboration with Dr. Zamudio and Dr. Al-Khan, he is developing new research to investigate the molecular biology that underlies placental invasion into the uterus in both normal and abnormal pregnancies. He is particularly interested in abnormally invasive placenta (placenta accreta) and preeclampsia.

Learn more about the Eleanor Delfs Lectureship for Pioneers