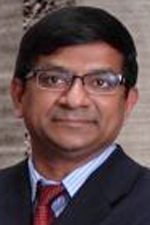 Dr. Manish Patankar is a Professor in the Division of Reproductive Sciences. Dr. Patankar grew up in Thane, India, a city that borders Mumbai (Bombay). His wife is a physical therapist at the American Family Children’s Hospital and they have a 7 year old daughter who is in first grade at Glenn Stephens Elementary.

Dr. Patankar was an instructor and Research Professor at Eastern Virginia Medical School until 2004 when he joined the department as Professor and also became a member of the UW-Madison Carbone Cancer Center. His current research includes developing diagnostic tests for ovarian cancer and preeclampsia and strategies for treating ovarian cancer.

What does he do in this spare time? He loves music and watching SpongeBob with his daughter.

One of the most interesting places that Dr. Patankar has visited is Bergen, Norway.

The primary focus of my research is to devise specific methods for early diagnosis of epithelial ovarian cancer (EOC) and to understand the effect of factors produced by ovarian tumors on the functional capacity of tumor infiltrating lymphocytes. This research involves extensive utilization of glycoproteomic analysis in conjunction with cellular immunology, molecular biology and glycobiology. 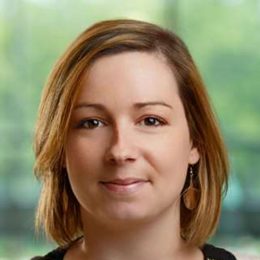 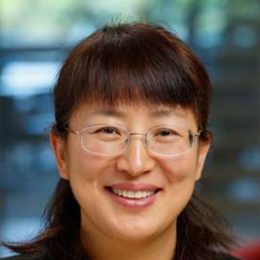 Dr. Bai’s research interests are centered on the application of stem cells on disease modeling and tissue regeneration. The current major focus of the laboratory is to utilize gain- and loss-of-function approaches to examine the novel molecular mechanisms underlying the roles of non-coding RNAs, mitochondria, and genetic factors in neurodegeneration and cardiotoxicity in mice, and translate the findings to humans using stem cell-derived brain cells, heart cells, three-dimensional mini brains, and heart organoids.

Non-coding RNAs, mitochondria, and cell stress-related genes in neurodegeneration:
Neurological disorders have emerged as a predominant healthcare concern in recent years due to their severe consequences on quality of life and prevalence throughout the world. Understanding the underlying mechanisms of these diseases and the interactions between different brain cell types is essential for the development of new therapeutics. Many drugs (e.g., anesthetics), environmental factors (e.g., alcohol), diseases, and genetic risks are related to neurodegeneration. We examine the novel molecular mechanisms underlying the roles of microRNAs, long non-coding RNAs, mitochondria, immediate early and other cell stress-related genes in neurodegeneration using both mouse, and human stem cell-derived brain cell and three-dimensional mini brain models

Stem cell-mediated myocardial regeneration
Myocardial infarction is one of the major causes of death throughout the world. Currently, there is not a highly effective approach for treatment. Stem cells hold promise in repairing injured cardiac tissue. Our lab is involved in studying the effect of the transplantation of adipose tissue-derived stem cells and induced pluripotent stem cell-derived cardiomyocytes on myocardial regeneration following ischemia injury. A molecular imaging method has been developed to investigate the molecular mechanisms controlling homing, engraftment, and survival of injected cells in vivo.

The mechanisms of impaired cardioprotection under diabetic conditions
Hyperglycemia has been shown to be particularly detrimental to the cardioprotective effects, with the underlying mechanisms remaining largely unknown. We have developed and validated a clinically relevant model of functional human cardiomyocytes derived from both normal induced pluripotent stem cells (iPSCs) and diabetes mellitus iPSCs. This in vitro model of human disease will enable developmental and comparative studies of normal and diabetic cardiomyocytes to address genetic and environmental mechanisms responsible for attenuation of cardioprotection signaling in diabetics. 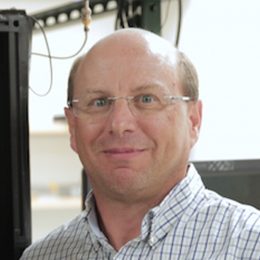 Campagnola’s research is directed toward developing high resolution imaging modalities. The technologies his group has developed can readily be applied to problems in eye and vision research. For example, the technique of Second Harmonic Generation (SHG) to image collagen fibrillar structure has been used by other labs to image the corneal structure. Expanding into eye research is a natural direction for the Campagnola Laboratory.

Alterations to the extracellular matrix (ECM) composition and structure are thought to be critical for tumor initiation and progression for several epithelial carcinomas, including those of the ovary and breast. Our lab develops Second Harmonic Generation (SHG) microscopy tools to quantitative assess these alterations in the stroma where we correlate the optical signatures with structural changes in the fibrillar assembly between normal and diseased tissues. This physical approach provides objective measurements that may be used to understand disease progression. To further investigate how remodeling enables invasion and metastasis in vivo we use multiphoton excited (MPE) photochemistry to fabricate biomimetic in vitro models of the ovarian ECM. The nano/microstructured models simulate the crosslinked fibrillar structure of the native ECM.

Tissue engineering has vast potential to improve human health by repair and maintenance of existing tissue or generation of replacement of tissues and organs. A major limitation has been an incomplete understanding of the underlying cell-ECM interactions that govern cell adhesion which will ultimately affect downstream functions. Our approach to this problem utilizes MPE photochemistry to create 3D biomimetic scaffolds directly from crosslinked proteins. Beginning with bio-inspired designs we will seek to achieve improved function.